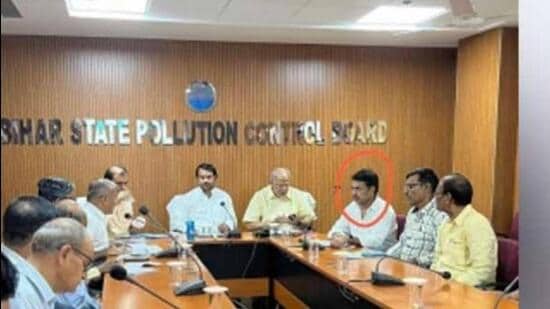 Patna News : Four days into the job, Bihar environment minister Tej Pratap Yadav landed into his first controversy on Friday after the opposition Bharatiya Janata Party (BJP) red-flagged the presence of his brother-in-law Shailesh Kumar at an official review meeting.

“Has Nitish Kumar issued instructions that brothers-in-law will not just attend official meetings but also conduct them,” Sushil Modi said in a post on Twitter.

BJP leaders who pulled out video clips and photographs of Tej Pratap Yadav’s previous meetings, said RJD chief Lalu Prasad Yadav’s son-in-law was seen on the back benches at a departmental meeting chaired by the minister on Wednesday but moved to the front row seat next to the minister the following day.

BJP spokesman Nikhil Anand said with Shailesh Kumar by his side, Tej Pratap Yadav was certain to become an outstanding minister in the Nitish Kumar cabinet.

“Tej Pratap Yadav remains in news for all the wrong reasons. Now, as a minister he seems to have outsourced his duties to his brother-in-law,” added Sushil Kumar Modi, who is leading the BJP’s offensive against the Nitish Kumar-led Grand Alliance government in the state.

Modi also flagged the presence of an RJD functionary at a meeting convened by deputy chief minister and health minister Tejashwi Yadav too. Modi, a Rajya Sabha MP, said the party functionary, even if he had been designated as an aide by Tejashwi, should not be sitting on the table but at the chairs behind the minister.

RJD spokesman Shakti Singh Yadav tried to brush aside the controversy, saying BJP leaders were raking insignificant things as they had run out of real issues to flag.

“Everyone knows how some of the BJP ministers ran their ministries. Their relatives and family members used to call the shots. There is no harm in seeking advice from anyone whether he or she belongs to any political party or the family,” said Shakti Yadav.

But the unseemly controversy has made some of RJD’s allies uncomfortable. A Congress leader noted that RJD leadership should take note of the perception of interference from Lalu Yadav’s family. Else, it will hurt the government’s image and reflect on its longevity.