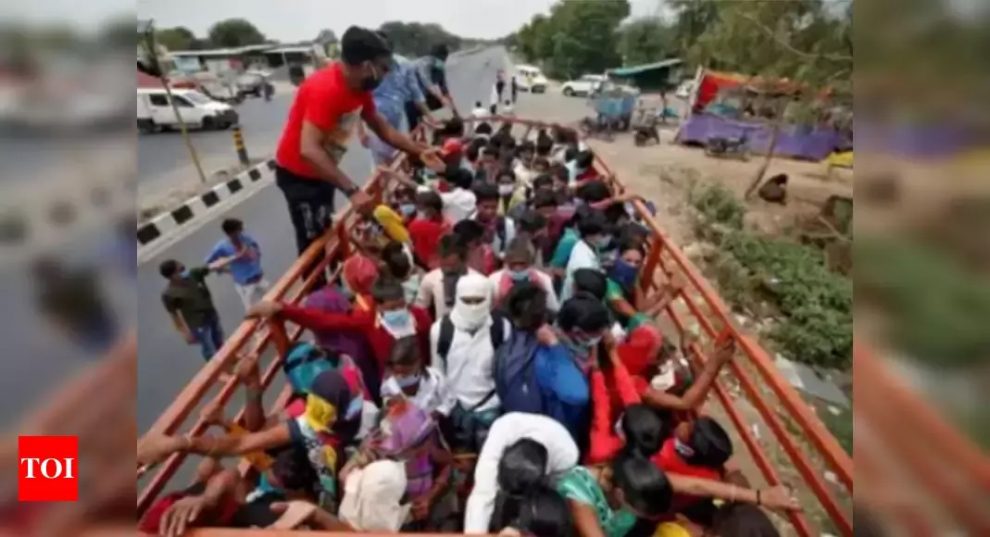 NEW DELHI: The Centre informed the Supreme Court on Tuesday that food and shelter for migrant labourers, poor and destitute were taken care of by governments and NGOs which had set up 26,000 shelters and 17,000 food camps across the country during the lockdown period.
Solicitor general Tushar Mehta submitted a status report to a bench of Chief Justice S A Bobde, and Justices S K Bail and Deepak Gupta and said while governments had set up 22,567 shelter homes, NGOs had pitched in with 3,909 more, which together housed over 10.3 lakh people. The 17,000 food camps fed over 84 lakh people daily, the government said. In addition, over 15 lakh migrant labourers are given shelter and food by employers and industries where they were employed, it added.
Appearing for rights activists Harsh Mander and others, advocate Prashant Bhushan doubted these figures and claimed that food at shelter homes was inedible and that social distancing norm was given a complete go-by. The SG told the court that these activists were making wild guesses and allegations as none of them had visited any food camp or shelter home even once.
The bench told the activists that the court could not supplant the governments’ wisdom with its own and there was little to deny that migrant labourers were getting food and shelter. “We are not experts and do not intent to interfere without knowing what it is all about. We do not want to supplant the wisdom of the government with ours. We cannot take better policy decisions at this stage. We do not want to interfere in government decisions for the next 10-15 days,” it said and adjourned hearing by a week. The lockdown period is scheduled till April 14.
When Bhushan said migrant labourers needed to be paid minimum wages to enable them to send money home, the SC asked why they needed money now as the government said anyone in need of food was being provided for. On the petitioners’ allegation that food at shelter homes was inedible, the bench said this was not an issue the courts could monitor at this juncture. The SG promised the court that grievances relating to food, if any, were being addressed as there was a dedicated helpline for this purpose and complaints were monitored daily.
When Bhushan alleged that the government was not doing anything, the SC bench said, “How can you say so when you say that you have not gone through the status report? Please go through it and we will hear you on Monday (April 13).”
The SG said except vague and baseless allegations, the PILs were bare of facts. “The petitioners harbour a misconception that except them, no one else is concerned about the country, being blissfully unaware of the gigantic exercise undertaken by the Centre and state governments,” he said.
“When the country is facing such an unprecedented crisis, filing of such petitions needs to be discouraged as these divert officials from their primary task of fighting the Covid-19 pandemic,” he said. He added that apart from shelter and food for migrant labourers and food for the poor and destitute, the government has decided to provide five kg of foodgrain and one kg of pulses to 80 crore individuals every month free of cost for the next three months. He said financial assistance was being provided to 3.5 crore construction workers from the Welfare Fund for Building and Other Construction Workers.