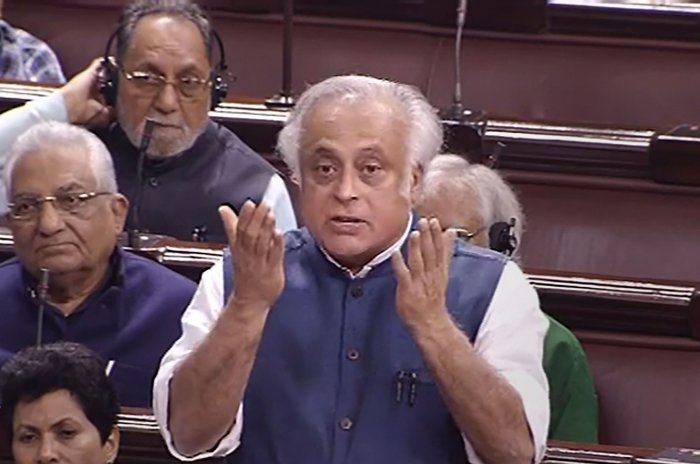 NEW DELHI: The Supreme Court on Tuesday refused to entertain senior Congress leader Jairam Ramesh’s plea seeking directions to the Centre and states to ensure universal coverage of food security during the Covid-19 pandemic and asked him to make a representation to the Union government.
It observed that people were approaching the top court under Article 32 of the Constitution without making any representation to the government authorities.
A bench of Justices Ashok Bhushan, Sanjay Kishan Kaul and B R Gavai, which took up the matter through video conferencing, said the court has found that grievances raised in the petition have not been brought to the notice of the government, therefore it is allowing the petition to be withdrawn.
It said the petitioner should make a detailed representation to the Centre, which shall be looked into by the government.
Senior advocate Salman Khurshid, appearing for Ramesh, said the issue raised in the petition relates to food security and the petitioner himself was instrumental in the framing of the National Food Security Act of 2013.
He said several people have moved back from their places of work to their native places and as they have ration cards of local area which were not being accepted by the authorities in the area to which they have returned.
Some of the migrant workers do not even have ration cards, he added.
The bench asked Khurshid whether any representation has been made to the authorities concerned.
He conceded that there was no representation but said that the matter was not adversarial and only intended to help the government serve the people.
The bench said the problem is that people are approaching the court under Article 32 without making a representation to the government and such petitions should be preceded by some initiative.
Khurshid said the government has announced for doubling of rations to the food card holders but what would happen to those who either don’t have it at all or don’t have it with them at the time of need.
He said the government’s one ration card scheme is yet to take shape and till then apex court verdict in Swaraj Abhiyan case, wherein it was stated that ration cards will not be necessary during disasters like draught, should be implemented.
To this, the bench said somebody not in his local place of work may have difficulty but for those who have returned to their native places, the state government can take care of them.
It said that in a situation like the coronavirus or Covid-19 pandemic, where problems is large, some aberrations may take place.
The bench said it can ask Solicitor General Tushar Mehta, appearing for the Centre, to look into the grievances raised and observed that hopefully after third phase of lockdown, things should start looking up.
Mehta said the government would consider the representation with due respect and in right earnest.
Ramesh said in his petition that reports suggest that large sections of poor and vulnerable are not getting food during the lockdown.
The former Union minister contended that there has been acute food shortage resulting out of the nation-wide lockdown and there is need for the implementation of the National Food Security Act (NFSA), 2013 and other measures.
He has sought directions from the court that the requirement of ration cards for supply of rations in the Public Distribution System (PDS) be relaxed during the pandemic so as to help mitigate the food shortage and prevent deaths.
The Congress leader said since the commencement of the lockdown, there have been various households, particularly those from marginalized backgrounds, who are not covered under the NFSA and are in dire need of rations.
“In the facts and circumstances as stated above, it is most respectfully prayed that this Court may be graciously pleased to issue a writ in the nature of mandamus, or any other writ, order or direction to the Respondents to ensure that the National Food Security Act, 2013 is being implemented rigorously by all States,” the petition said.
It also sought a direction for the competent authorities to do away with the mandatory requirement of release of grains against production of ration cards for the period of the lockdown.
Ramesh has also sought directions from the court clarifying that households would be exempt from Aadhaar based biometric authentication for obtaining foodgrains under PDS.