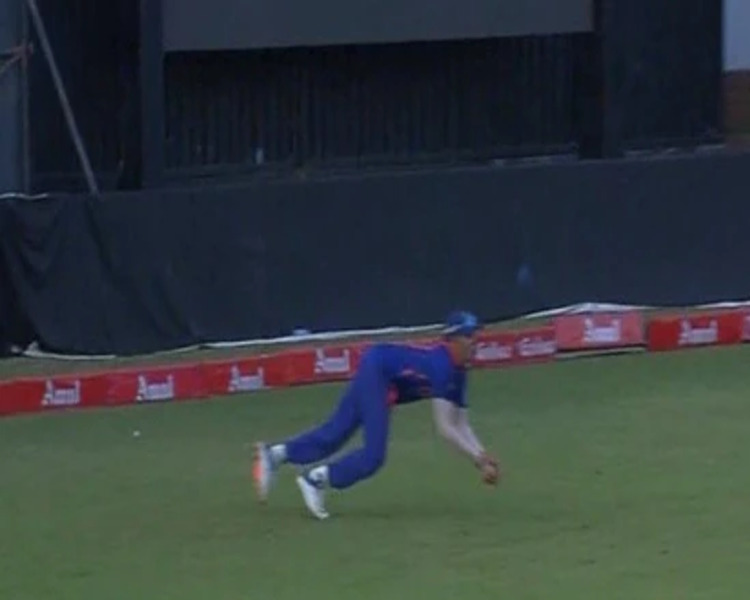 Sikandar Raza’s fighting ton wasn’t enough to take Zimbabwe past the finish line as India held nerves to record a 13-run win and complete 3-0 ODI series sweep in Harare on Monday. Raza, who hit 115 in 95 balls, kept the home side alive in their 290 chase with his 104-run partnership with Brad Evans, who chipped in with 28 off 36 deliveries. Raza, however, fell to an incredible Shubman Gill catch in the penultimate over, as the pendulum swung again in India’s favour.

Raza, who walked off to a standing ovation, tried to clear the long-on boundary but didn’t get the elevation. Gill was quick to run in from the fence and put on a well-timed dive. The young Indian grabbed the ball inches above the ground, which perhaps sealed the game and clean sweep for KL Rahul and co.

Raza perished after a valiant effort with the bat and even Indian players were seen congratulating the batter. Earlier, a superb maiden hundred by batter Shubman Gill and a half-century by Ishan Kishan powered India to 289/8 at the end of their 50 overs.

Gill, who smashed his maiden international hundred, helped India get to a competitive 289, while Zimbabwe’s innings ended at 276 in 49.3 overs. The 22-year-old touched the three-figure mark more than three years after making his India debut. His hundred came less than a month after he came agonisingly close, scoring an unbeaten 98 against the West Indies in Port of Spain.

Gill shared a 140-run stand with Ishan after the visiting side decided to bat for the first time in the series. Evans, the son of a former Zimbabwe international, was the only bowler to impress, taking a career-best 5-54 in his 10 overs.

On the bowling front, Avesh Khan, who returned 3-66, took the most wickets among the Indian bowlers, but it was Shardul Thakur who claimed the prized wicket of Raza. He ended up with figures of 1-55.

After the game, Gill said his focus was to shrink the dot ball percentage, which was the reason behind his acceleration after reaching the fifty mark. He dedicated the ton to his father.

“I was just trying to minimise my dot ball percentage. I tried to hit the gaps as much as possible. When I went in, there were a couple of bowlers bowling good. It was crucial to get through that. Once we were settled, we knew we could attack,” Gill, who claimed the Player of the Match award, said in the post-match presentation.

“Feels good when you are with the same bunch. My father has been my primary coach. I got a schooling after I got out in the second ODI, so I dedicate this to him.”

From the Urdu Press: Death of justice for Bilkis and Jalore outrage to jettisoning of Gadkari, Shivraj and BJP vs AAP
‘No you’re not coming…’: Why a former India coach stopped Deepak Hooda from practicing