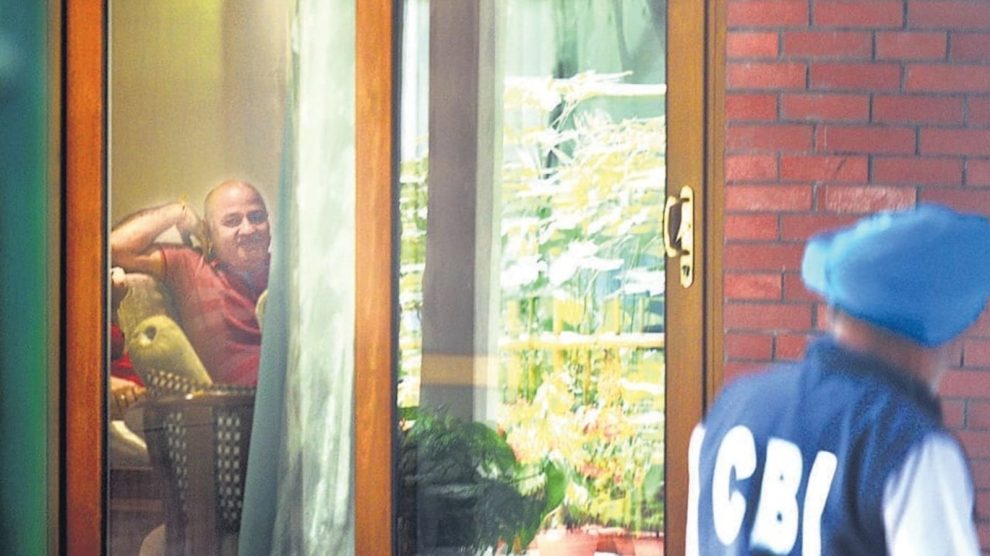 Delhi News : Delhi chief minister Arvind Kejriwal on Friday branded the CBI raids on his deputy Manish Sisodia as “attempts on orders from above to create obstacles in the work of the AAP government” even as the action by the central probe agency triggered a massive showdown between the Aam Aadmi Party and the Bharatiya Janata Party (BJP).

Friday’s developments – Sisodia was raided in connection with allegations that there were irregularities in Delhi’s excise policy – come at a time of growing confrontations between the two parties, especially as they are set to enter the electoral contest for the upcoming polls in Gujarat and Himachal Pradesh.

“This is not the first raid. In the last seven years, several raids have been conducted against Manish Sisodia, and several fake cases were lodged. Raids have been conducted against me, Satyendar Jain, Kailash Gahlot and many of our leaders. Nothing was found in those raids. Nothing will be found in these raids as well. CBI is doing its work. We should not panic. Obstacles will not stop us. They (CBI) have orders from above to trouble us and create obstacles. We have to make sure that obstacles do not stop our work,” Kejriwal said in a digital press conference.

Soon after the CBI officials landed at his house, Sisodia tweeted and announced his full cooperation in the investigation. “We welcome the CBI. We will extend all cooperation in investigation so that the truth can come out very soon. It is unfortunate that those who do good work in our country are harassed like this. That is why our country has not yet become No 1. Till now, many cases have been slapped against me, but nothing was found. Nothing will be found in this case as well. My work for good education in the country cannot be stopped,” Sisodia said in a series of tweets.

It was not known if Sisodia was questioned by the CBI officials during the raid. A Delhi government spokesperson is yet to respond to questions whether Sisodia was probed and what areas of his residence were searched by the officials of the federal agency.

The CBI raids, which lasted over 14 hours, came around a month after lieutenant governor VK Saxena recommended a CBI probe into alleged irregularities and corruption in the implementation of Delhi government’s excise policy 2021-22.

Showing a copy of the New York Times which has published a report on Delhi government’s work in the field of education, Kejriwal said: “The New York Times has published a story on the education model of Delhi and reforms in the Delhi government schools. It has carried the picture of Manish Sisodia who has been declared the best education minister of the world. A day after the report appeared, CBI reached his residence for raids. We welcome the CBI with open arms, we will fully cooperate with them.”

Delhi’s education and healthcare model are being discussed globally, the CM added. “They want to stop its progress which is why Delhi’s health and education ministers are being raided and arrested. Whoever tried to do some good in these 75 years was stopped by these people. They let India lag behind, but we will not let this continue. Delhi’s progress won’t stop, no matter what.”

Kejriwal also talked about his “mission to make India number 1 in the world” that he announced on Wednesday. The chief minister invited people to join the mission by giving a missed call on ‘9510001000’.

AAP Rajya Sabha MP Raghav Chadha alleged the Centre has unleashed agencies such as the CBI on his party’s leaders to finish Arvind Kejriwal off as the Delhi chief minister has emerged as an alternative to Prime Minister Narendra Modi in national politics.

“After AAP formed a majority government in Punjab [this year], people of the country started considering Kejriwal as the alternative to Modi. The BJP and Modi are scared of the rising political stature of Kejriwal. BJP wants to stop Kejriwal’s mission to make India no.1, but CBI, ED and any other agency cannot stop Kejriwal in completing his mission,” said Chadha at a press conference.

Chadha said that people earlier asked Modi versus who. “…now [they are] saying Modi versus Kejriwal. After AAP’s victory in Punjab, people of the country are saying that they have found the alternative; …an alternative to Modi in Kejriwal,” said Chadha, calling Kejriwal the hero of the most rapidly growing political party in post-independence India.

Senior AAP leader and Rajya Sabha MP Sanjay Singh, who spoke in a press conference before that of Chadha, at party’s office, said the real motive behind the raids was not the probe into the policy but to dent Kejriwal’s popularity. “If the liquor policy is an issue, a probe should also have been ordered into Gujarat hooch tragedy [in July],” said Singh. “Modi cannot stop the rising popularity of Kejriwal.”

CBI carried out raids at Sisodia’s residence and 20 other premises after registering a case. Delhi LG Saxena last month recommended a federal probe into the excise policy. The Enforcement Directorate earlier in May arrested Delhi’s health minister Satyendar Jain in connection with a money laundering case.

Saxena sent a complaint to CBI to look into several procedures that were allegedly tweaked to benefit private liquor barons and individuals.

Sisodia, who is also the excise minister in the Aam Aadmi Party government, steered the 2021-22 excise policy introduced in November 2021. It was aimed at making the process of purchasing liquor more consumer-friendly and bringing in various reforms to amplify government revenues and curb liquor mafia.

Saxena’s complaint was based on chief secretary Naresh Kumar’s report on July 8, which referred to benefits to private liquor barons “in lieu of financial benefits to individuals at the highest level leading up to the minister in charge of excise and finance”.

The issues cited included a refund of ₹30 crore to a bidder, a tweak in the calculation of a levy on imported beer, the purported relaxations in provisions in tender documents for private retail licensees, the waiving off of ₹144.36 crore of licence fee due to the pandemic lockdown, and allowing bid winners to open alternate vends.

Singh said the CBI will not find anything against Sisodia. “…previous raids conducted against Kejriwal, and Sisodia in cases against over 40 lawmakers did not reveal anything. The raids will expose the central government.”

He said Kejriwal’s governance has gained international popularity. “You have put the health minister who revolutionised the health sector in jail…now you are preparing to put the education minister [Sisodia] in jail too. Kejriwal’s model is based on education and health reforms and becoming popular in the whole world,” said Singh.