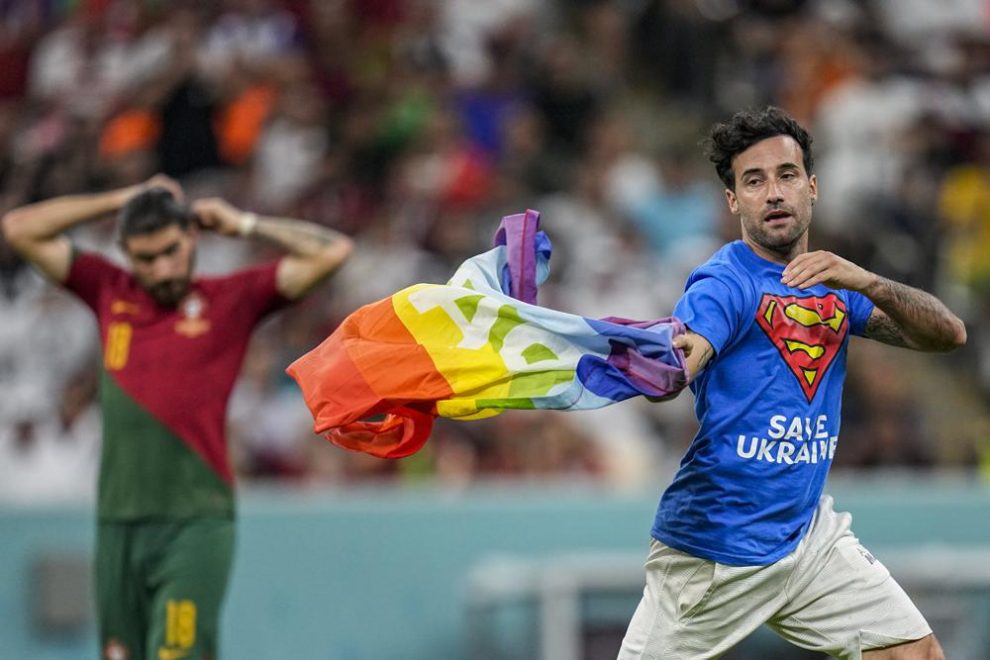 Security officials chased the protester down and the flag was dropped on the field before the person was escorted away. The referee then picked up the flag and left it on the sideline, where it stayed for a few moments before a worker came and collected it.

A protester ran onto the field Monday carrying a rainbow flag and wearing a blue Superman T-shirt that said “SAVE UKRAINE” on the front and “RESPECT FOR IRANIAN WOMAN” on the back during a World Cup match between Portugal and Uruguay.
Security officials chased the protester down and the flag was dropped on the field before the person was escorted away. The referee then picked up the flag and left it on the sideline, where it stayed for a few moments before a worker came and collected it.
The protester was ushered away through a tunnel. It wasn’t immediately clear if the person faced any charges or had been detained by police.
Thierry De Backer, FIFA’s media officer at the game, told The Associated Press he had “no idea” what happened to the protester. Local Qatari organizers would not comment.
In the first week of the tournament in Qatar, seven European teams lost the battle to wear multi-colored “One Love” armbands during World Cup matches. Fans also complained they weren’t allowed to bring items with rainbow colors, a symbol of LGBTQ rights, into the stadiums of the conservative Islamic emirate.
Qatar’s laws against gay sex and treatment of LGBTQ people were flashpoints in the run-up to the first World Cup to be held in the Middle East. Qatar has said everyone was welcome, including LGBTQ fans, but that visitors should respect the nation’s culture.
The incident occurred during the second half of the game at Lusail Stadium.
Portugal midfielder Bruno Fernandes, who scored both goals in his team’s 2-0 win, said he was so focused on the game that he didn’t really notice what the protester’s intent was, and that he thought the protester might have wanted to take a picture with Cristiano Ronaldo, his star teammate.
“To be honest I didn’t really see what was the message that was trying to be conveyed,” Fernandes said through a translator. “But we’ve already spoken about that many times. … We respect all human rights but those are political issues where we unfortunately don’t really have much strength, where we can’t really change anything.”
Before the World Cup started, Fernandes said soccer should be “for everyone,” adding that he wasn’t happy about workers who died building stadiums in Qatar.
(Except for the headline, this story has not been edited by GOVT.in staff and is published from a syndicated feed.)