States rush to give migrants food, and some hope - Govt.in - Telling the truth- always! 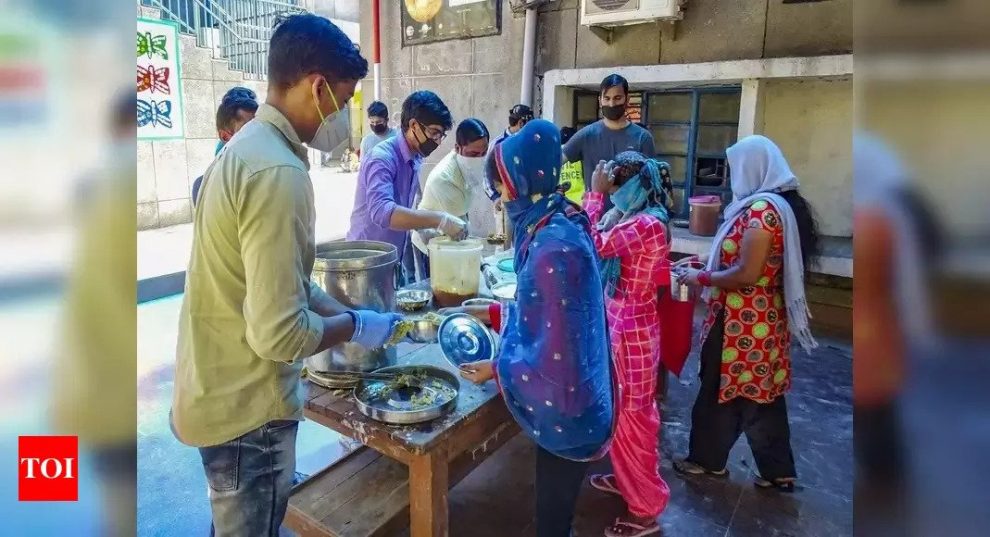 As states rushed to seal their borders on Sunday to stem the avalanche of migrant workers on a long march home from different directions, the enormity of the Covid-19 fight grew to include another daunting task — of medically screening and providing food, transport, shelter and a sliver of hope to those already halfway down roads to the hinterland.
Jaipur was swamped with hungry and weary migrant workers and their families who had set out from parts of Gujarat and Maharashtra after the lockdown started at midnight last Tuesday. Most of them had walked and occasionally hitched rides on goods vehicles in the hope of reaching their villages in Mathura, Agra, Aligarh and other districts of UP. At Transport Nagar in Jaipur, cops were kept busy since Saturday night by hordes of migrants asking for directions. The state government arranged for buses to take these people home, but there were far too many of them to be accommodated. Those who couldn’t board a bus decided to continue walking. Food packets provided by NGOs quickly ran out. “Since Saturday night, 35,000 migrant workers have passed by,” said a policeman.
At least 1.25 lakh migrant labourers who arrived in the state from Gujarat and Maharastra were screened by the teams of medical and health department on Sunday. For migrants returning to Rajasthan from other states, medical screening centres have been set up in Dungarpur, Banswara, Udaipur, Jalore, Sirohi and Ajmer. “Screening has is been on since Thursday. With numbers increasing on Saturday, extra teams have been deployed in various districts to ensure proper screening,” additional chief secretary (health) Rohit Kumar Singh said.
In MP, the influx of migrant labour from Delhi-Ghaziabad intensified on Sunday. Those headed from the north have to reach Morena after crossing the Chambal river from Dholpur in neighbouring Rajasthan. More than 3,000 people had reached the MP-Rajasthan border in Morena till 5pm. Hundreds more are on the way.
“They are being stopped at three checkpoints in Morena. Their numbers are going up. We have teams of doctors screening them for Covid-19 on the border before they are allowed to move further,” Morena collector Priyanka Das said.
After being fed, these migrants are being provided transport for the onward journey to their respective villages.
Hundreds from the Saharia tribe are also moving back to Sheopur from Rajasthan. Inward migration is already proving to be a problem in Barwani district. Thousands from there migrate to Maharashtra, Gujarat and southern states in search of work. They are flooding back now.
Also, since the Agra-Mumbai highway passes through Barwani district, those headed for UP and Rajasthan are also streaming in. Two shelters have been set up on the MP- Maharashtra border.
In UP, the Agra district administration requested the Army to help take stranded migrants to their destination. a day after a delivery boy of a Delhi restaurant died after walking 200km from the capital to Agra. Besides 10 Army trucks, over 300 state buses operated on different routes. Another 100 buses took migrants from Bareilly to various places.
From Lucknow, 721 buses ferried 60,000 people to different parts of the state. CM Yogi Adityanath visited the Mohan toll plaza in the morning to take stock of the arrangements made for migrant workers. Aligarh DM CB Singh said around 3 lakh migrant workers had so far been ferried on buses to different districts of UP and neighbouring states.
The Bihar government has decided to keep migrant workers returning from different states in camps being set up in the border districts. Everyone returning by road will have to spend at least 14 days in a camp. Additional chief secretary (home) Amir Subhani said the state was contemplating fixing a deadline by which people returning from other states would be allowed in. However, as reported by PTI, those marching towards their native villages in Bihar and elsewhere are not being welcomed back home and instead are reported to the police, who are handing them over to medical authorities for tests and subsequent measures. Some villages in Bihar have gone into lockdown, refusing entry of people from neighbouring areas.
Bihar CM Nitish Kumar has already expressed reservations about Delhi and UP’s decision to send stranded daily-wage workers to the state. Siwan native Bhagat Kumar Gond and nine others reached their villages on Sunday, travelling nearly 500km from Kanpur on so-called “jugaad” vehicles. Rajkumar Prasad and seven others who worked in a shoe factory in Kanpur returned walking through highways for more than two days. Kundan Kumar, from Vijay Nagar in Ghaziabad, said he and 70 others boarded a truck to reach Aurangabad in Bihar. “Each one of us paid Rs 1,000 to be taken till the Bihar border,” he said.
In Karnataka, CM BS Yediyurappa said after an all-party meeting on Sunday that the government was arranging shelter and medical screening for those stranded on the state borders. Around 1,000 migrant Kannadiga workers are now stuck along the state’s borders with Goa and Maharashtra. After the state government set up a helpline for migrant workers on Saturday, it logged 2,833 calls in 12 hours.
Kerala’s Kottayam district saw migrant workers from UP, Bihar, Bengal and Odisha hit the streets of Paippad town demanding food, water and transport to return to their respective states. District collector PK Sudheer Babu said food had been arranged for these workers till April 15.
A group of migrant workers headed for north India from Andhra Pradesh in a container vehicle was stopped while passing through Telangana’s Gadwal Jogulamba district. Another group on their way to Maharashtra from Hyderabad was stopped at Patancherru. They have been provided food and shelter, officials said.
In Odisha, which shares borders with AP, Bengal, Chhattisgarh and Jharkhand, the HC on Sunday directed the state government to make arrangements in the border districts to medically screen migrant workers returning in droves and give them food and shelter.

Those who entered UP after March 1 to undergo medicals
Curfew Mata Mandir shuts its gates, but hears prayers