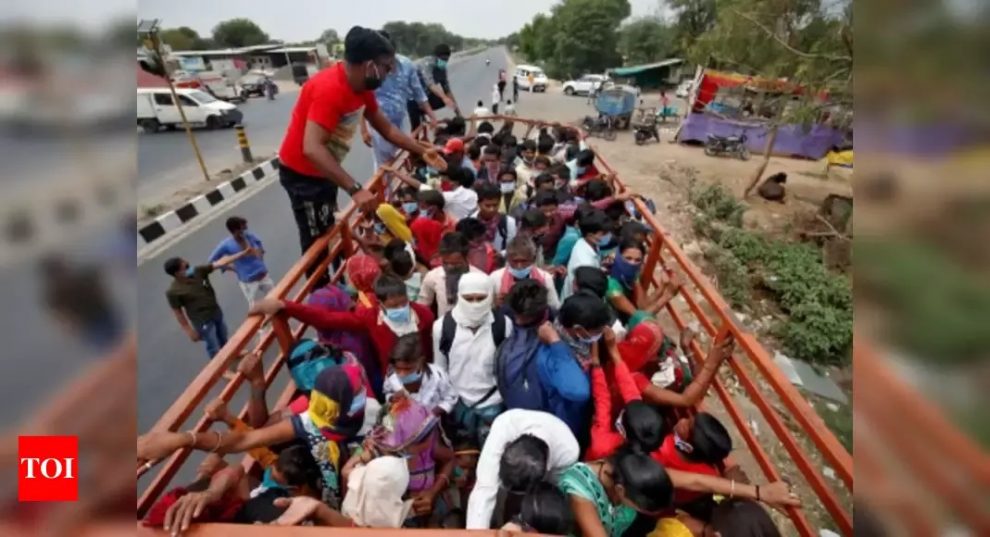 Ankit Kumar, a contractual labourer, had walked all night — for about 10 hours — when TOI spoke to him on Wednesday morning. “My home in Saharanpur is 135 km from Meerut. With no income for the past few days and no hope of any in the coming month, I had no option but to leave,” said Kumar. He will have to walk some more.
In Uttarakhand, Moorat Lal — who has had one meal in two days — will cycle 800 km from Dehradun to Raebareli. Along with eight others, the 30-year-old has covered 90 km and reached Laksar (Haridwar) on Wednesday. Tonight, this crew of plumbers, electricians and carpenters, would be taking shelter at the railway station. There’s 700 more km to go. Among them, they have less than 2,000 rupees. “It might take five days to reach, unless we are stopped by police. But we can’t go back. There’s nothing there for us,” said Lal.
With Covid-19 lockdown robbing daily wagers and labourers of their income, thousands across India are walking long distances, over 100 kilometres in many cases, and often on empty stomachs to reach their native villages and towns.
In Agra, closure of tourism and footwear industry which employs scores of daily wagers has left many in dire straits. UP CM Yogi Adityanath has announced Rs 1,000 monthly allowance each for around 35 lakh labourers, hawkers and vendors and free ration to 1.65 crore daily wagers, but many that TOI spoke to said they had no information about this.
With no money and no work, those working in bordering states are desperate to make it home. Mohammad Kasim and five others managed to reach Aligarh from Palwal (Haryana) after 28 hours of being on the road, walking and hitchhiking on trucks. “We ate biscuits and bananas as we didn’t have money for proper meals,” he said.
Gaurav Kumar, who worked at a shoe manufacturing company in Haridwar, said about 200 of them left on Tuesday night — hours after the 21-day lockdown was announced — to reach Bijnor in UP. “Even the children walked,” he said. Another person, Yaseen, travelled with his friends in an empty milk tanker to Najibabad.
In Rudrapur, Madan (who only uses his first name) was trying to make the trip with a five-monthold infant to Bareilly but was turned back. He was, however, adamant that he would try to leave again. “I don’t have money to feed my family as I have not got any work for past five days. I have no option,” he said.
Uttarakhand CM Trivendra Singh Rawat released a helpline number where migrant workers can seek assistance to reach their hometowns. Some good samaritans have also extended a helping hand. A local journalist went out of his way to drop a labourer who was planning to walk from Haridwar to Chamba, 90 km away. He then picked up another woman, who works at a hotel in Devprayag, and drove her to Rishikesh.