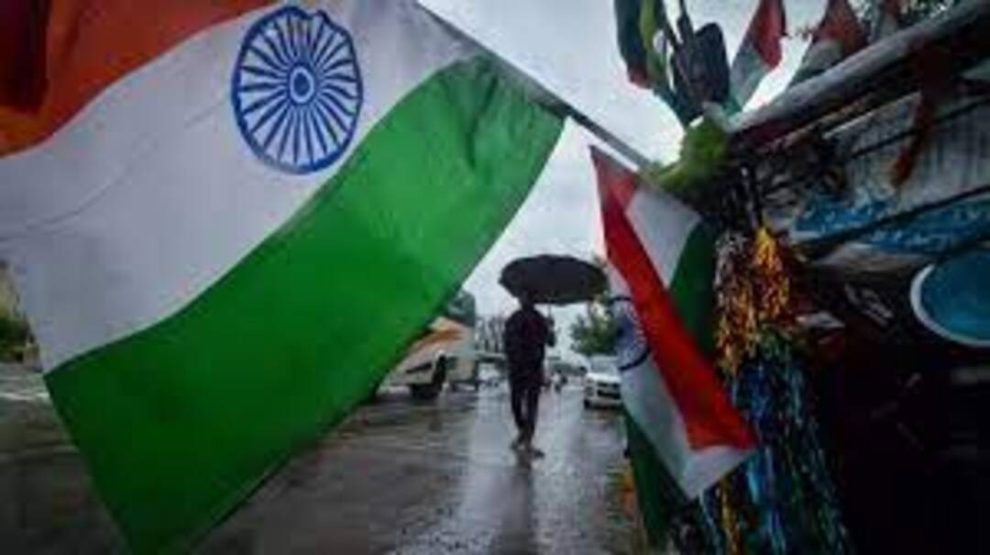 The flags would be distributed to the village panchayats for free to help the villagers fly the national tricolour atop their houses or on their premises.  A hawker selling Indian flags on a rainy day, ahead of Independence Day celebrations at Ring Road, in New Delhi, India

Atleast five village panchayats in Tamil Nadu would fly the Khadi national flags exclusively produced by the Avvai Ashram of the Gandhigram Trust in Sivasailam, this Independence Day.

Apparently inspired by the Centre’s ‘Har Ghar Tiranga’ campaign, the Gandhigram Trust, situated in Tamil Nadu’s southern district of Tirunelveli, has embarked on a mission to churn out 5,000 Khadi flags.

The flags would be distributed to the village panchayats for free to help the villagers fly the national tricolour atop their houses or on their premises.

“We have trained 10 persons to stitch the national flag and print the Ashoka chakra on them. They are working ceaselessly along with 5 others at our tailoring unit in Sivasailam,” says K Shivakumar, managing trustee of Gandhigram Trust.

They were trained about a fortnight ago and have been told to confine to the specifications stipulated by the Central government and also use only Khadi material, he said. On an average about 500 to 600 flags are made daily and the Gandhigram Trust hopes to complete the production by August 12 to facilitate the distribution of the flags to village panchayats, he told PTI.

The workers, mostly women, have been trained under a livelihood programme of the trust. They would be provided employment all through the year.

“Through this and many other initiatives we hope to ensure lasting income to the members of the Annaporna self help group (SHG) which we have formed,” he said.

“Gandhigram is proud that our unit in Sivasailam is actively involved in making the national flags to help the people celebrate the Independence Day,” Shivakumar said.

Responding to a question, he said this is the first time the Sivasailam unit is producing the national flags. “Our government is encouraging people to hoist the flags in their houses, so we decided to participate in the campaign to help the people celebrate the 75th year of India’s Independence in a grand manner. Incidentally, this is also the 75th year of our Gandhigram,” the managing trustee said.

Besides Gandhigram and Sivasailam, Chettiapatti, Thoppampatti and Alamarathupatti panchayats will receive the flags and in turn they would distribute the flags to the villagers.

“The relaxation in the flag code rules by the Central government permitting the public to hoist national flags as part of the Har Ghar Triranga is an opportunity for every citizen to carry home the national tricolour,” says Lt Col N Thiagarajan, veteran, who had participated in the Kargil war.

He hopes to distribute flags for free to the poor people and tribals and help them express their patriotism. “I have planned to plant 750 saplings at the CRPF training centre, Avadi, as part of the Azadi Ka Amrit Mahotsav,” Thiagarajan said.