'The Great Escape' by 225 migrants in containers from Telangana to Rajasthan due to Covid-19 lockdown - Govt.in - Telling the truth- always! 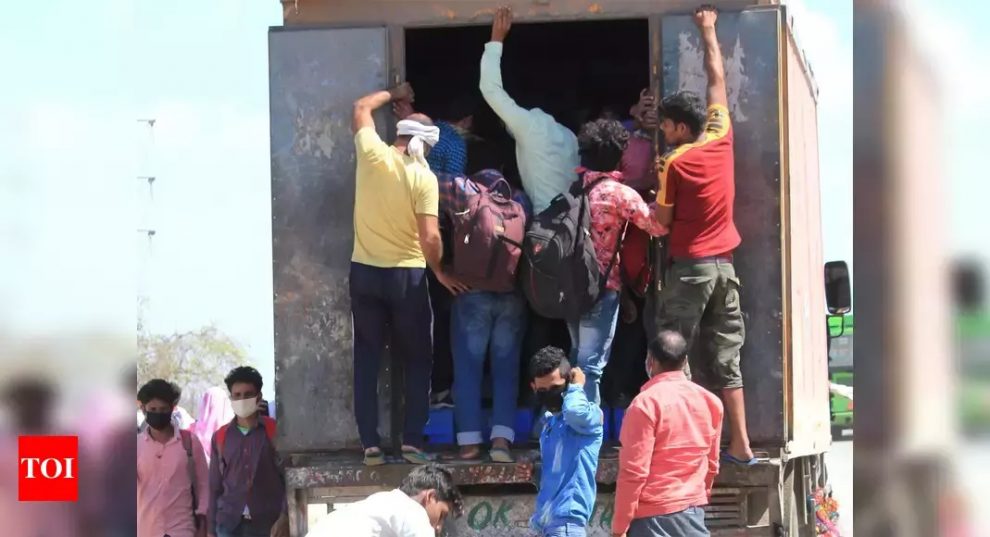 MUMBAI: In the current ‘national lockdown’, a group of around 225 migrants – including a lone young woman and her two minor kids – pulled off a daring escape from coronavirus, travelling some 2,000 km from Hyderabad (Telangana) to their native villages in Bikaner-Nagaur in Rajasthan, clocking 60 hours in three container trucks.
Sneaking out on foot in small batches from Hyderabad outskirts to avoid the police’s eagle eyes, on Wednesday (March 25) at 6 p.m., they finally reached home safely on Saturday (March 28) morning at 6 am — to a rousing welcome by their wives and children, parents, near-and-dear and hordes of thrilled villagers.
Coronavirus lockdown: Latest updates
The 2,000-kms long journey in the noisy metal containers was an adventure by itself, often traversing through treacherous hills and dense forest regions, infested by gun-toting Maoists and tigers, leopards, sloth bears, reptiles, with barely sufficient food among themselves, but high morale, a burning intention “to reach home” and great camaraderie.
The long, wrecking journey was every bit a real-life thriller – similar to the French action film, “The Transporter” (2002) in which Jason Statham rescues a batch of illegal Chinese immigrants smuggled in containers.
There were many ups and downs en route, on the rough, extremely noisy, oven-hot and suffocating journey in the closed metal containers, said the organizer Dhanraj Jangu, 72.

For instance, before reaching every district check-post, the three truckers from a Haryana-based transporter, lugging back the empty containers, would warn them by sharp blare of horns and halt the vehicle, said Jangu.
“We would grab our bare belongings, hop off, trudge 4-5 kms, whether morning, afternoon, evening or dead night, cross the district or state borders, and again climb back into the containers, and tried to catch a wink till the next checkpost,” a happy Sahu told IANS after reaching his village in Bikaner today.
At one point in Yavatmal, their trucks were seized by the district police and it was only with the intervention of farmers’ leader Kishore Tiwari that the group escaped detention on March 26.
“After verifying that they were not Maoists or anti-social elements, we gave them food, bathing and resting facilities and offered to host them in a village school or temple till the alockdown’ on transport was lifted,” Tiwari told IANS of their plight.
However, unaware of Chief Minister Uddhav Thackeray’s appeal to all migrants and Deputy Chief Minister Ajit Pawar’s decision on March 26 to end the ‘transport lockdown’ following an appeal by prominent lawyer Vinod Tiwari, the 225-strong group made their own secret plans.
“After the police released the container trucks later that night (March 26), we just hopped onto them and proceededa We got no opportunity to thank Kishore Tiwariji who helped us a lot and will always get our blessings,” said Jangu. He was probably unaware that Kishore Tiwari happens to be an Advisor to Maharashtra CM.
Earning everybody’s admiration for his enterprising spirit, Jangu functioned as an unofficial treasurer, somehow managed to arrange food, occasionally huge quantities of bananas, chips, local delicacies and water for them and the truck driver-cleaner at all locations en route.
“The sheer luxury was when a wayside hotel opened specially for us for bathing-washing, a modest ‘snacky meal’ and some rest for the weary travelersa In the 70-hours journey, we got one proper meal in Maharashtra, one half a meal in Madhya Pradesh, a couple of times packet snacks and on March 27 evening, piping hot cups of tea,” said Genaram Pooniya, 27.
At all locations, they took special care to ensure the lone woman and her children were accommodated with some privacy, prioritized for food distribution and some even hauled her kids on their shoulders during the ‘border-walks’, said Sahu.
After hopping off at various district borders, state borders, encountering menacing policemen while they footed 2-4 kms to the other side and wearily climbing onto the waiting trucks, it was on March 27 evening that they collectively let out cheers.
“Most of us became emotional, hugged each other, made V (victory) signs, clapped and sange when we sighted the Jhalawar border to enter our motherland Rajasthan on Friday evening,” said Jangu.
Inside Rajasthan, they zoomed through Kota, Ajmer and other towns, before 175 people got off at their dusty native villages in Nagaur, and the remaining 50-odd proceeded to Bikaner, some 60-70 kms away.
At all places, they were accorded a “hero’s welcome” by the normally shy ‘bindnis’ even unabashedly hugging their long-separated husbands, doing a quick jig with them, then escorting them with giggles to their homes.
“Mari bindni ne rota, rota, mane gale lagayo”, (My tearful wife hugged me) said one groupie of the warm encounter.
The 225 groupies are mostly carpenters, glaziers or civil workers, earning between Rs 15,000-Rs 30,000 per month depending on the work and experience, either as daily wagers or on contracts, making two trips from Rajasthan to Telangana in a year.
Post-safe return, Saturday morning was booked for the medical tests of all the 225 people at the local government hospitals and all emerged unscathed – although poorer by Rs 225,000 – from the invisible scourge of COVID-19!

A TOI initiative to help keep you and the nation safe

Why so serious about “G-20 Summit? Twitterati got your back