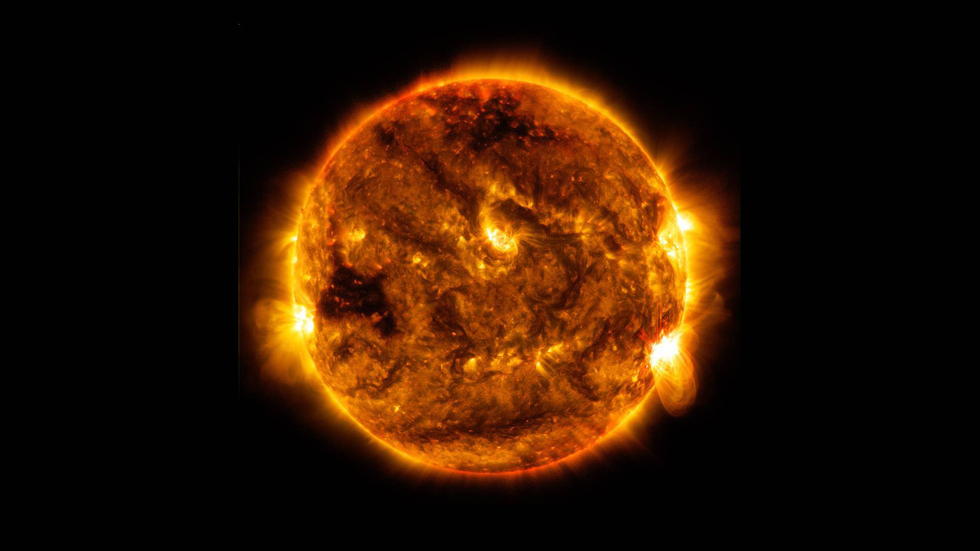 The real colour of the Sun is actually white and the reason the dwarf star generally looks yellow is because of a strange play of physics of light which makes the sun appear yellow most of the time.

For those who think that the Sun is actually yellow, that is not its true colour. And on Tuesday, former NASA astronaut Scott Kelly confirmed this space fact.
The real colour of the Sun is actually white and the reason the dwarf star generally looks yellow is because of a strange play of physics of light which makes the sun appear yellow most of the time. The sunlight is essentially all colours mixed together, which appear to our eyes as white. But this is only easy to see in pictures taken from space.

The sun appears yellow due to our atmosphere. But once you leave the Earth’s atmosphere, the Sun appears white rather than any single colour. This is due to how our eyes see colour.

We are unable to perceive a singular colour of the sun because the amount of sunlight simply saturates the photoreceptor cells in our eyes, causing all the colours to be mushed together. When every colour of light is combined, you end up with white. Thus, the sun appears yellow on Earth and white in space.

On Earth, the atmosphere also plays a role in the colour of the Sun. According to NASA, since shorter wavelength blue light is scattered more efficiently than longer wavelength red light, we lose some of the blue tints of the sun as sunlight passes through the atmosphere. In addition, all wavelengths of visible light passing through our atmosphere are attenuated so that the light that reaches our eyes does not immediately saturate the cone receptors.

“This allows the brain to perceive colour from the image with a little less blue-yellow. Though it does not affect what our eyes see, all x-ray and gamma-ray radiation is filtered out before it comes close to the ground. Most UV is absorbed by stratospheric ozone (above 10km) and most IR is absorbed by water vapour and other molecules with non-zero dipole moments,” the US space agency explained.

Further, it also added that when the sunlight passes through a lot of atmospheres as is the case of sunrises and sunsets, even more, blue light is scattered and a much greater percentage of the longest wavelength (red) light makes it to our eyes.