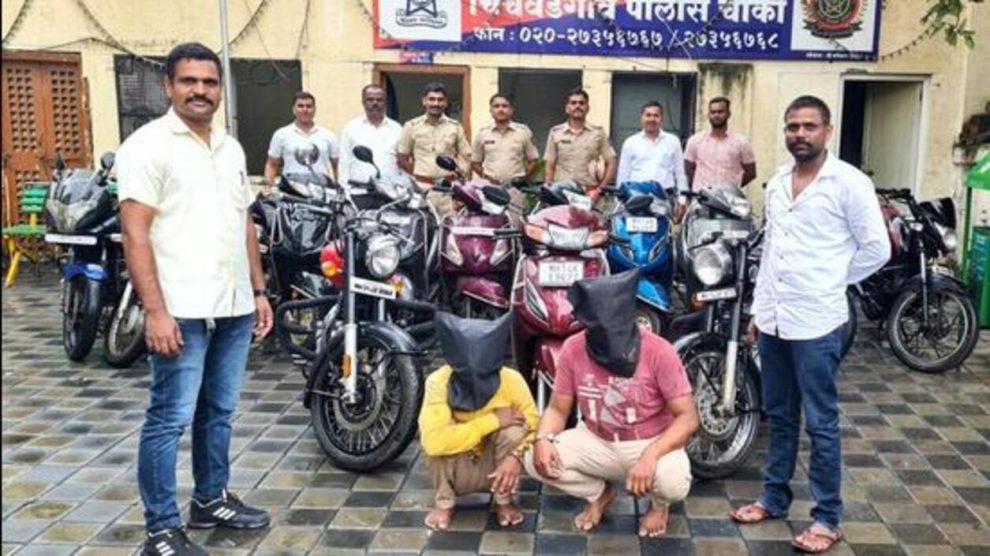 Pune News :  Police said, the accused sold the motorcycles in the outskirts area of the city so that it would be easier for them to escape after the theft Police have recovered 14 motorcycles worth ₹6, 96,000 from the accused arrested.

The Pimpri-Chinchwad Police have arrested two persons for allegedly posing as policemen and stealing motorcycles and selling them in the outskirts of the city.

Police have recovered 14 motorcycles worth ₹6, 96,000 from the accused arrested.

According to police, during patrolling, officers Rohit Pinjarkar and Umesh Wankhede got a tip-off of two persons visiting Gurudwara chowk in connection with motorcycle thefts. Accordingly, they laid a trap and caught the accused.

Manchak Ipper, deputy commissioner of police of the Pimpri Chinchwad police commissionerate, said, ‘‘The accused used fake police identity cards and threatened people they would lodge a police complaint against them and took away the motorcycles.’’

They wore police uniforms and carried fake identity cards so that they could travel hassle-free across the city, they thought that no one would question them, added Ipper. “Many people did not lodge a police complaint against theft of their motorcycle, as accused threatened them,” said Ipper.

Police said, the accused sold the motorcycles in the outskirts area of the city so that it would be easier for them to escape after the theft. Many times, without authority they asked motorcycle riders about valid documents and driving licenses. If they failed to produce valid documents accused seized their motorcycles.

Drugs Worth ₹ 80 Lakh Seized In Mumbai, 2 Arrested: Police
‘I thought ‘Here we go again, another Sachin Tendulkar’. Like one wasn’t enough’