UP, Bihar hit out at Delhi for exodus - Govt.in - Telling the truth- always! 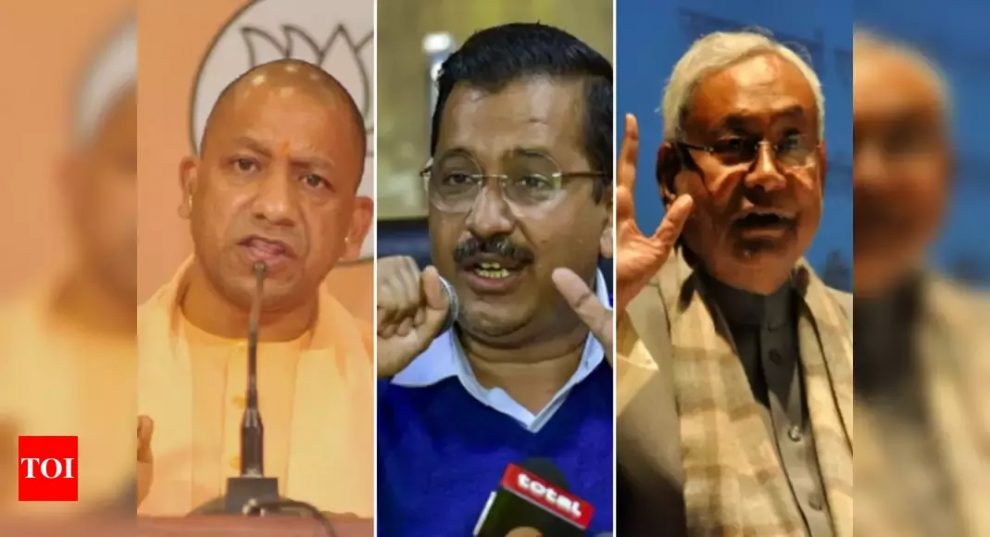 LUCKNOW/PATNA: UP has blamed Delhi’s AAP government for the influx of thousands of migrant workers and others in the state, defying the 21-day lockdown order to counter COVID-19.
Hours after appealing to migrant workers to remain where they were and not attempt to cross the state border, chief minister Yogi Adityanath took a late-night decision on Friday to start operation of 1,000 buses to ferry people from the border, and those who had already entered UP, to their villages. Delhi government too deployed 100 buses on Saturday morning to ferry people from the border up to Hapur in west UP.
Meanwhile, Mrityunjay Kumar, advisor to the CM tweeted: “Lakhs of people are coming to UP from the Delhi border. Delhi government is unable to stop them. DTC buses are dropping them off at the border. I appeal to Arvind Kejriwal to make suitable arrangements for them in Delhi so that they can remain there. UP CM Yogi Adityanath has appealed to people to stay where they are. Arrangement for their food and stay will be made. Officials from UP have been given directions on this. Due to the irresponsible attitude of some, do not help in the spread of the Corona pandemic.”
A UP press note said migrantss arriving into the state were largely from Delhi and some from Punjab and Haryana. “The people… said Kejriwal makes promises for cheap publicity. He had recently promised free food for 4 lakh people but they got nothing. Like always, their own CM Yogi came to their rescue,” it said.
Delhi deputy CM Manish Sisodia told TOI that it was unfortunate for BJP to be politicising this issue. “Unlike what the UP CM has said, anyone who is living and working in Delhi is one of ours, irrespective of what state they originally belong to. I have personally met many labourers and offered them food and stay in our government schools but they were adamant about going home. Till this morning the border was closed and the police had been told to now allow border crossing. As soon as a decision was taken that they would be sent home, we arranged for 100 buses to help them across,” he said.
Joining the politcal slugfest, Bihar CM Nitish Kumar said that sending stranded migrant workers to their respective states would be a wrong step as it would defeat the very purpose of nationwide lockdown and lead to further spread of coronavirus.
On Friday night, as reports of people being stranded at the Delhi-UP border started increasing, the CM summoned the principal secretary transport and directed him to start the operation of buses from Noida, Ghaziabad, Bulandshaher, Aligarh, Hapur, Meerut and Agra. By midnight, many of these buses had started on their first round of ferrying passengers.
The bigger worry for the state now, said an official, was to ensure that none of these at least two lakh people who were being escorted to their villages and home towns, were carrying the COVID-19 infection.
“All passengers are being given food before they are boarding buses and a doctor on duty is carrying out a thermal scan for each of them. We are getting people from all states, not just Delhi but also Maharashtra, Madhya Pradesh and Gujarat. It is crucial to keep a watch on them to ensure that the virus does not spread in rural UP,” he said.
The CM helpline, which has been calling councilors and gram pradhans and asking them to keep an eye on those people who entered their areas within the past two weeks, is now changing strategy. In the second round of contact, directions are being issued to keep all such people, who have just reached or will be arriving in the villages from other states, in strict quarantine. Their families will also be isolated and at the first sign of illness, the concerned chief medical officer is to be contacted.
In Patna, Nitish said it amid reports that the Delhi and Uttar Pradesh governments were making arrangements of special buses to send stranded migrant workers to their respective states. “It will also lead to such a situation where putting an effective check on spread of epidemic disease will be a difficult task for all of us,” Nitish said.
Nitish further suggested that people should stay wherever they are in the wake of the lockdown. He said necessary arrangements for their stay and meal should be made by the respective local administration. Local administration should make a camp to ensure the stay of migrant workers.