UP: Quota politics back in focus; decision on including Nishads under SC soon - Govt.in - Telling the truth- always! 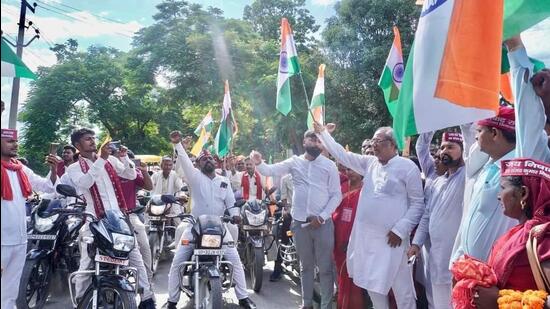 BJP ally, the Nishad Party, said that an announcement on moving their community from OBC to Scheduled Caste (SC) is imminent

Quota-based politics seems to be returning to focus in Uttar Pradesh. A day after Bharatiya Janata Party (BJP) ally, the Nishad Party, said that an announcement on moving their community from OBC to Scheduled Caste (SC) is imminent, the Suheldev Bharatiya Samaj Party (SBSP) has now flagged its long -standing demand for implementation of the social justice committee report.

It is a demand with which BJP’s other ally, Apna Dal (Sonelal), isn’t comfortable with.

The SBSP has decided to roll out a ‘Savdhan Yatra’ from September 26 which will be raising the issue of caste census.

However, after their split with Samajwadi Party, SBSP chief Om Prakash Rajbhar has been cautious not to target the BJP.

He reportedly gets security cover extended by the UP government which shows his proximity with the ruling party.

“Chief minister Yogi Adityanath has been pushing for the rights of the oppressed and backward. In fact, it was during his first stint as chief minister that the social justice committee was set up. Back then, however, despite the report having been submitted, it wasn’t implemented. It’s time to do it now,” said Rajbhar.

During his ‘Savdhan Yatra’, Rajbhar said he would be targeting those parties who didn’t do anything about giving representation to the most oppressed when they were in power.

These developments have coincided with the UP government deciding to assess OBC representation in government recruitments over the past 10 years.

All departments have been asked to give details of the sub-caste of all candidates in OBC recruitments made from January 2010 to March 2020.

A two-day meeting of officers of 83 departments has been convened from August 23, officials confirmed.

The SBSP, which had partnered with the BJP in 2017 UP polls and sided with the Samajwadi Party (SP) in 2022 UP polls, welcomed the UP government’s decision.

“This assessment of OBC sub-castes in government recruitments is important. Once this is done, we would expect the government to quickly implement the social justice committee report so that the rights of the neglected and marginalized could be ensured,” said Rajbhar.

In December 2021, the state government had received the report of the social justice committee that recommended dividing OBCs into three categories – pichda, ati pichda aur sarvadhik pichda (backward, very backward and most backward).

There is a similar recommendation for dividing Dalits into three categories – with 4 Dalit sub-castes in Dalit category, 31 under ati Dalit and 46 under maha Dalit.

In both OBC and Dalits, the committee has recommended maximum reservation for the most backward, most Dalit.

BJP’s long-standing ally, Apna Dal (Sonelal), however, has reservations on the issue and feels a fresh census is required.

“We are told that our issue is under active consideration of the union social justice ministry and a decision on having the Nishads included under SC is likely to be made soon,” said UP cabinet minister Sanjay Nishad, whose Nishad Party comprises members of riverine community of boatmen and fishermen.