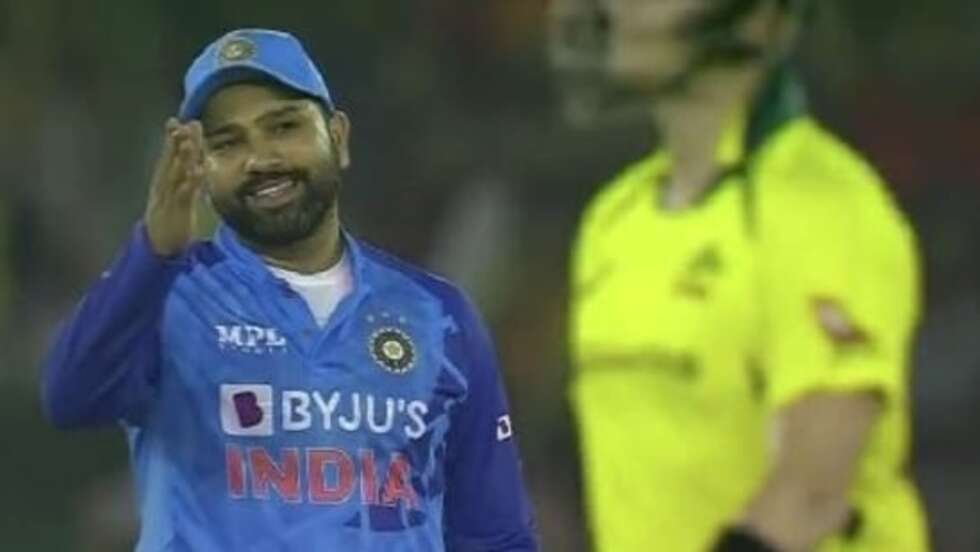 Just like former skipper Virat Kohli, India’s all-format captain Rohit Sharma also wears his heart on his sleeves when the veteran opener gets to marshal his troops in the international arena. Rohit’s animated captaincy style was on display during the Australian innings in the recently concluded 1st T20I between Aaron Finch’s men and hosts India at Mohali.

Showing his emotions after a successful Decision Review System (DRS) call, Rohit gave Steve Smith an epic send-off during the 12th over bowled by pacer Umesh Yadav. India had opted to go for a review against Smith, who plundered 10 runs in the first two deliveries of Yadav’s 12th over. With replays confirming a clear spike on Ultra Edge, Smith received his marching orders as the Australian batter was evidently caught behind on the third delivery of the game-changing over.

Celebrating Smith’s wicket, Rohit was seen poking fun at the Australian batter following his controversial dismissal. Rohit’s hilarious reaction became an instant hit among the fans and followers of the game. Giving Rohit another reason to smile, pacer Umesh bagged the jackpot wicket of Glenn Maxwell in the same over.

However, Umesh’s twin strikes failed to thwart Australia’s bid of completing the record run chase at the Punjab Cricket Association IS Bindra Stadium on Tuesday. After the dismissals of Smith and Maxwell, Tim David and Matthew Wade played crucial knocks to rescue Australia in the Mohali encounter.

Wade’s 45 off 21 balls and David’s 18 off 14 balls guided Australia to 211-6 in 19.2 overs as the visitors secured a 4-wicket win over the Rohit-led side. With the memorable win over India, Finch-led Australia has taken a 1-0 lead in the three-match series. Australia’s Cameron Green was named the Player of the Match for his quick-fire 61-run knock in 30 balls. Rohit-led Team India will meet Australia in the series decider at the Vidarbha Cricket Association Stadium on Friday.