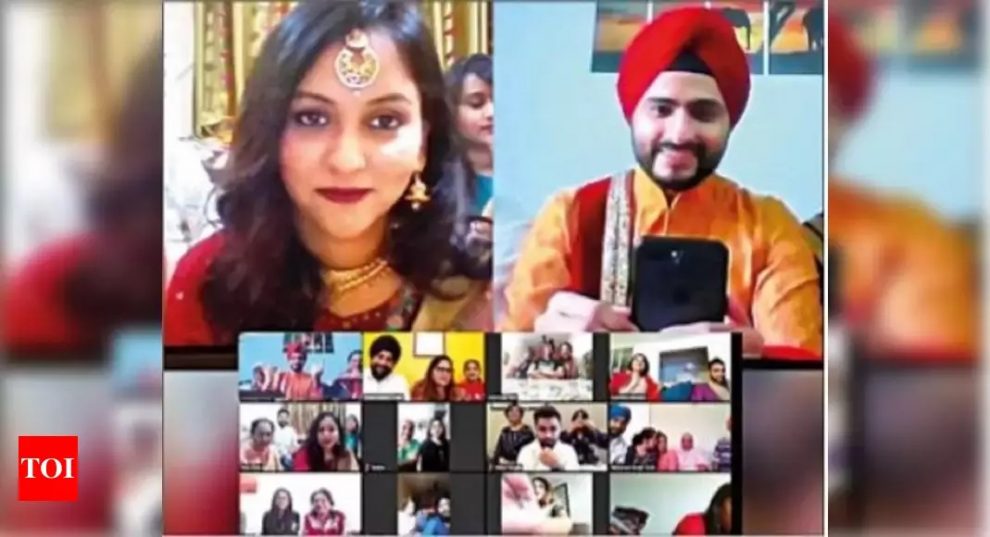 MUMBAI: For 29-year-old Mumbai-based merchant navy officer, Preet Singh, and Delhi girl, Neet Kaur, April 4 was supposed to mark the end of a year-long, long-distance relationship and the start of an exciting new life together.
Not allowing the lockdown to play spoilsport, the couple stuck to the date and, in a unique ceremony performed over a video calling app, they accepted each other as life partners with the blessings of both families and friends who had logged in from as far as Dubai, Canada and Australia.
Dressed in wedding finery, their families even broke into a dance at the end of the ceremony and congratulatory speeches that lasted two hours.
“We were heartbroken because we had been planning the wedding for six months. But every cloud has a silver lining and we found ours too,” said Preet, adding Neet will move in with him when the lockdown ends.
The couple met online a year ago and started dating soon after. Preet said they decided to get married within six months. Preet said he came up with the idea of going ahead with the wedding and it was not difficult to convince their families to come on board.
“Since it will not be safe to have a large gathering even after the lockdown is lifted, we decided to go ahead with the wedding,” Preet said. His bachelor party in Goa was already cancelled and the honeymoon in Sri Lanka also had to be postponed.
The couple picked 11.30 am as it was convenient for everyone who attended from across the globe. “Our original guest list of around 150 had to be trimmed down to 50. Once we were ‘virtually wedded’, guests helped themselves to chocolates they had kept ready. This was followed by a dance session,” he added.

Hangings, controversies, high-profile inmates -Tihar has seen it all in 62 years