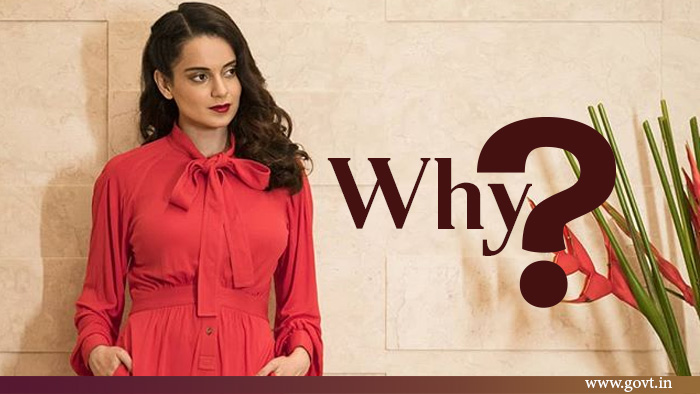 There was a time when undeniably we used to admire Kangana Ranaut for everything she used to do. In those early years, very few knew her for what she is. Her media appearance was nearly zero as she used to stay out of controversies. Now, not a day goes by when she is not mentioned in headlines. Despite any upcoming or ongoing projects, she gets enough media coverage, and the reasons are in front of everyone.

The recent buzz is about her upcoming movie Judgemental hai kya, where she is seen opposite to a versatile actor Rajkumar Rao. And alongside the buzz is about her recent spat with a journalist. She even released a video where she asked the whole media to boycott her and acknowledged that it would be the best thing they could do for her.

would like your attention. This is important. Listen up!

Going back a little to the times when she made headlines with her spectacular performances, it shows her how her graph came down on maintaining general relations with people around. Her journey from debut film Gangster (2006) to Manikarnika (2019) is quite on a topsy turvy note.

There was a time when she was known as Simran and then Queen. This could be the complimentary victory for any actor. However, now she is being mentioned with various other adjectives before her name, and that makes our heartache.

After fashion (2008), her stardom rose to fame as her marvelous performance made her win the National Film Award for Best Supporting Actress. The list of her achievements doesn’t end here. The movies like Queen, Tanu Weds Manu, and Tanu Weds Manu Returns became like her best super hit films so far, and after that, she won Padma Shri awards for Queen.

She is outspoken, and that is the quality we all admired when we first saw her calling Karan Johar ‘ flag ‘bearer of nepotism’ and ‘movie mafia’ all on his face in his show Koffee With Karan.
It seems like things got a bit dirty when she started making news with her controversies more than her work and achievements. Her various interviews where she made sense by pouring her heart about gender disparity and same pay scale, sexual harassment, and whatnot.

It all got changed with the biggest conflict of Rebel Ranaut with Handsome Hunk of B’town, Hrithik Roshan, which involved labeling him as ‘silly ex’ and exchange of legal suits between them. Things turned out after that as her rage for every little thing erupted like a volcano at any given point. This, we all know, is not healthy for anyone with a huge persona and stardom. Where on the one hand, few celebrities admired her for taking a stand, few of B’town celebs took her down for her statements.

Then after arrived a buzz during Lok Sabha Elections 2019, Kangana Ranaut did not hesitate to showcase her awe of BJP and PMO India Narendra Modi. The statements employed by her and the likes of actors Anupam Kher and Vivek Oberoi bordered on fandom rather than severe political following.

And now, when her upcoming movie is around the corner, her argument with a journalist took over the bigger picture and she is seemed to lose control over it once again.

Not only that sums up why nobody is taking her seriously, one more thing is ruining her stardom and that is her sister Rangoli’s involvement in her conflicts with personal opinion.

It is sad to see how once Kangana’s “Out of the box” perspective took over the nation is now working as a mere rageful label.

UP BTC DElEd: 75956 students failed in the first semester of DElEd

Game Update: Live The Magic Of PUBG 4 In A Cinematic Way
Know it all- What are the key changes in Aadhaar?

Anyone up for a suggestion? ISRO is looking for a name to stamp on moon land