'Why is Umesh playing? If Chahar was fit to play... confusion to zaroor hai' - Govt.in - Telling the truth- always! 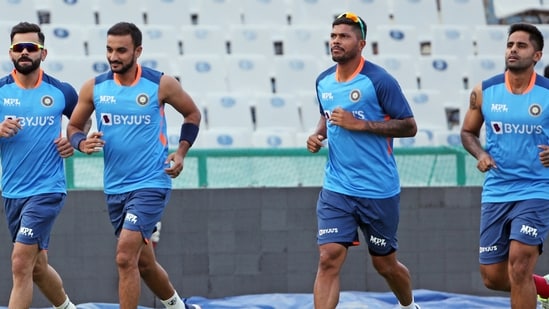 In the Mohali T20I, Harshal Patel and Bhuvneshwar Kumar together conceded 101 runs in their eight overs while Umesh Yadav took two wickets for 27 and Axar Patel returned 3/17.

Umesh Yadav got a game after more than three years while Deepak Chahar sat on the sidelines in India’s T20I series opener versus Australia on Tuesday. The home side managed to post a challenging total of 208 for six, with all-rounder Hardik Pandya smashing a rapid 71 after KL Rahul’s 55 and Suryakumar Yadav’s 25-ball 41. But Australia chased down India’s mammoth total with four balls remaining, as the home side’s bowling let them down, especially in death overs.

It was Australia’s second-highest successful chase in the white-ball format and highest against India. Harshal Patel and Bhuvneshwar Kumar together conceded 101 runs in their eight overs while Umesh took two wickets for 27 and Axar Patel returned 3/17.

With Chahar warming the bench despite being in the scheme of things for the upcoming World Cup, former India pacer Ashish Nehra said he should have played the Mohali T20I in place of Umesh. The seam pair of Chahar and Mohammed Shami has been kept on standby for the showpiece T20 event in Australia.

“Why is Umesh Yadav playing? You brought Shami and then you had Deepak Chahar. You said Bumrah wasn’t fit, I would also like to know why you didn’t play Deepak Chahar. There was a time when Chahar was the frontrunner to replace Bhuvneshwar Kumar. If Deepak Chahar was fit to play and Umesh Yadav has played ahead of him, then confusion to zaroor hai,” Nehra said in an interaction on Cricbuzz.

Former India pacer RP Singh questioned whether Bumhrah’s return would solve the team’s bowling issues and noted a dip in performance when the World T20 is just around the corner.

“These are not good signs. Okay, in Asia Cup, we were saying that ‘we don’t have Harshal Patel and Jasprit Bumrah.’ Harshal Patel was here and he went away for runs. Who knows if Bumrah returns, he might also go for runs. So, we can’t say that someday our main players are going to return and make us win matches. The more we are nearing the T20 World Cup, our performance is dipping,” he said.

‘There’s competition even in players within team now’: Samson on T20 WC snub
After Punjab governor calls off session, AAP to march to Raj Bhawan in Chandigarh