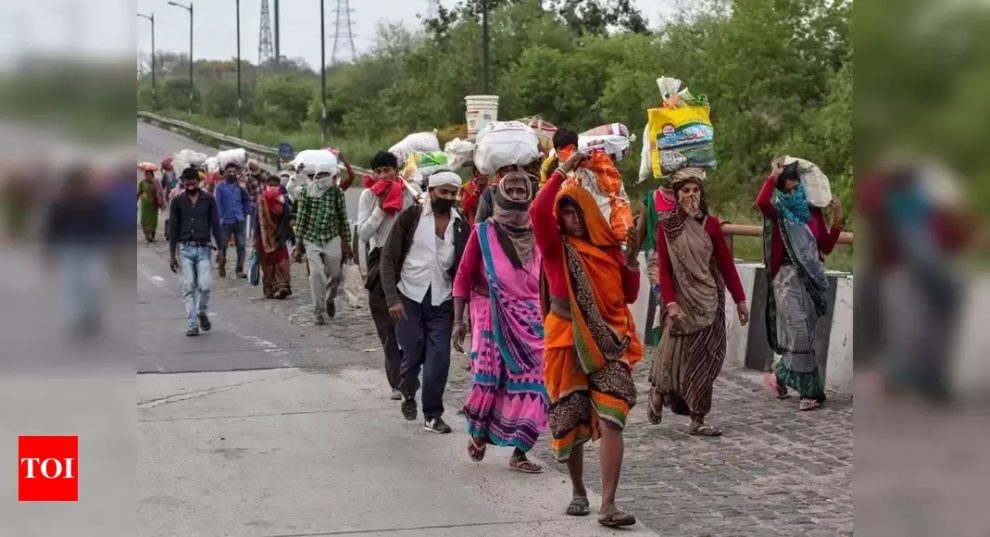 A new humanitarian crisis may be unfolding in the country. Tens of thousands of desperate people, mainly migrant labourers reduced to joblessness by the lockdown and with little or no money or food, have been streaming out of India’s major cities for the past few days, trying to walk hundreds of kilometres to reach their homes in small towns and villages.
These tides of men, women and children, driven by the uncompromising arithmetic of survival and fear of contracting the coronavirus, pose a new challenge to the government’s all-out attempts to contain the spread of the disease. “Some 26,000 people have reached Ratanpur, on the Gujarat-Rajasthan border, in the past two-three days. Our teams are first listing them before medical teams screen them. Those who have been advised quarantine are stamped and then transported to their villages on buses arranged by the administration,” according to Dungarpur collector Kanaram.
There are thousands leaving the Delhi-NCR, trudging down the Yamuna Expressway and the expressway to Meerut. Raj Kumar is one: he has set out for home with just Rs 1,000 in hand. But home is Chhapra in Bihar, 1,050 km away. And he has a toddler in his arms while his wife walks beside him. He is hoping he could hitch a ride, or several, home. Police checkposts on the outskirts of Jaipur are coming across people walking back to their villages. TOI visits the Jaipur-Agra highway and finds hundreds walking on the road, carrying bags.
“My village is 110 km from Jaipur. I have no option but to go back. The police stopped us at a few places but, when convinced that we had no other choice, they let us carry on,” says Kishan Mahawar a daily-wage labourer.
The scale of migration was so large that it frightened senior officers at the Jaipur police commissionerate when told by subordinates that hundreds of workers were walking towards Transport Nagar. “A migration is on… We have spoken to many of them who said they are left without any money. Yesterday we helped some of them reach their villages,” said Jaipur commissioner Anand Srivastav. On the Gujarat-Rajasthan border, patwaris were preparing lists of the arriving population according to the areas to which they belong and medical teams of 20 doctors and 40 nurses have been working day and night screening them. Most of them do not have money and had not eaten properly, Kanaram, the collector, said, adding though it was a large number of people, they were adhering to the social distancing protocol “as far as possible”.
“Around 16,000 had reached till Wednesday and some 12,000 were reported to have reached in seven hours on Thursday, between 6 am and 1 pm. A large number is expected in the next two days,” Kanaram said, adding that 50 buses had been arranged by the district administration to transport these people to their homes. In Maharashtra, a man walked 135km, from Nagpur to Sindewahi, and was stop ped by the police about 25km from his village.
Separately, police in the state’s Pandharkawda district prevented a tragedy when they intercepted five container vehicles stuffed with over 350 migrant labourers from Telangana. All belonged to Jodhpur. Yavatmal SP M Rajkumar said since the vehicles had not entered Maharashtra, the police had sent them back. But the labourers, forced out of their places of residence by their employers in Telangana, decided to walk on to their homes 1,500 km away.
In UP, over 160 daily-wage earners travelling from Delhi and its surroundings in three vehicles, including a water tanker, were stopped by police. After medical examinations determined they were not suffering from Covid-19, they were sent on to their villages in Bahraich, Kaiserganj and Huzooprur. In Hyderabad, about a dozen labourers from a slum had set out on a journey of about 600km, to a village in Visakhapatnam.
By Thursday they had walked and hitched rides to Kodada, on the Telangana-Andhra Pradesh border. Gujarat was no different. Thousands left Ahmedabad for their homes in MP, Rajasthan and UP, while police tempted them to stay back with promises of shelter and food. Ravindra Yadav, a woodworker in a furniture factory, had Rs 12 in his pocket for the road home to Barabanki, UP. “It is our only hope as our employer told us to leave as there would no work nor salary,” Yadav said.

When humanity shines even through the gloom of Covid-19
Day 2 of lockdown: Truckers abandon vehicles, delivery boys fret about safety

Ahead of Independence Day, a new record for Chandigarh students| Video