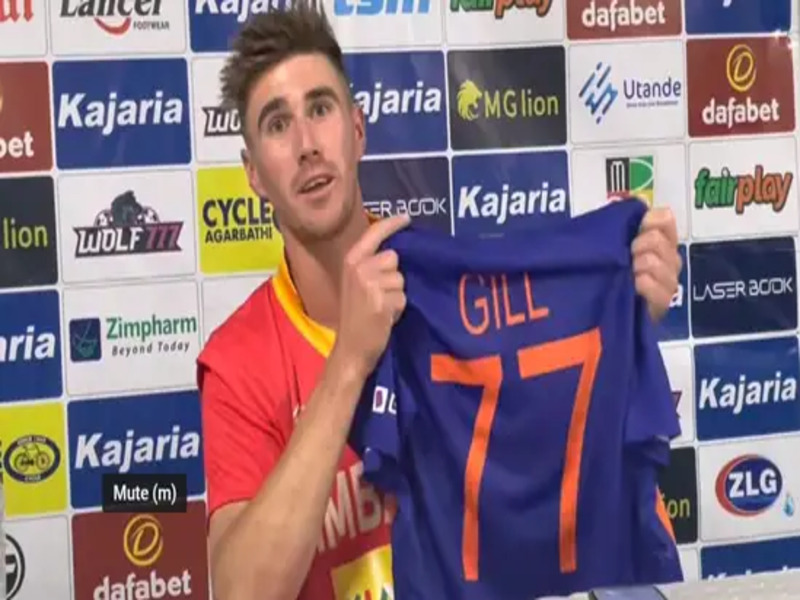 Zimbabwe cricketer Brad Evans had a brilliant outing against India in the third and final ODI of the series in Harare on Monday. He got the wickets of India’s captain for the series KL Rahul, Shikhar Dhawan, Deepak Hooda and also accounted for top-scorer Shubman Gill after his record hundred towards the end of India’s innings but what made the right-arm seamer’s day a memorable one was a special gift from India batter Gill. The 22-year-old, who slammed his maiden ODI hundred, smashing his way to the highest score by an Indian in Zimbabwe in ODI cricket, gave his shirt to Evans after the match, which India won by 13 runs to claim the series 3-0.

Evans, who returned with career-best figures of 5 for 54, brought Gill’s jersey to the post-match press conference and narrated how big a fan he is of the stylish right-handed batter.

“Yeah for sure (he was one of the factors in deciding the series) Going into the series, I was one of his biggest fans, that’s why I got his shirt and now I’m playing against him. He is a world-class player. Even from the first game, you could just tell… For example, when he gets a single, he hits it hard exactly where he intends to. That’s a skill and it comes after years of practice. I just sometimes watch him in awe ‘this guy is so good.’ That’s a reason I’m a fan. I watched him on TV in the IPL and in Australia when they won that Test series… That’s a reason I’m a fan. To play against him was awesome,” Evans said.

When asked about the particular moment Gill, who was also adjudged Player of the Series for scoring 245 runs in three matches, gifted him the shirt, Evans said he had requested Gill to do a jersey exchange ahead of the start of the final ODI.

“I was just walking back (after that match). I just gave him my shirt. He took his shirt off and gave it to me. It was quite quick. I had actually asked him in the morning if we could change shirts and he agreed. He’s a nice guy,” Evans, who harbours a dream of playing IPL in the future added.

The right-arm seamer also made a useful contribution of 28 of 36. His partnership of 104 runs with Sikandar Raza (115) took the match to the last over but Zimbabwe fell short of the 290-run target.